The 15th arrondissement is one of the largest and the most densely populated districts of Paris, housing 10% of all local Parisians. Partly commercial and mostly residential, with no real tourist hotspots, it is nonetheless a great place to discover, explore, dine and stay in “real’ Paris. This area oozes history, tradition and charm and is recommended for any serious cultural visitor who wants to see beyond the Arc de Triomphe and Notre Dame!
The 15th arrondissement is in the southwest corner of Paris’s left bank, bordering the River Seine and abutting the 7th arrondissement which is home to The Eiffel Tower, Musée d’Orsay, Musée Rodin, the Assemblée Nationale of the French Parliament and various other government headquarters. As such, the 15th arrondissement (district) makes an affordable place to stay within striking distance of the main attractions.

With its spacious residential boulevards lined with grand apartment buildings, shops, cafés and businesses, the 15th arrondissement is a great place to browse the specialist shops and wine cellars. Elsewhere you will find parks, squares and gardens on almost every street, along with churches, chapels, synagogues and the famous Olivier de Serres Art School.

The gated artists’ community of La Ruche has around 60 private studios and workshops where Chagall, Modigliani and Brancusi scraped a living. It was built by Gustave Eiffel as an overflow wine store for the 1889 Universal Expo. Known as “The Beehive” for its odd shape, it makes a great photo op!

Everything there is to know about Paris 15th Arrondissement!

Quartiers Within the 15th Arrondissement

Like all the arrondissements of Paris, the 15ème is divided into four quartiers, each with its own individual atmosphere.

Named after a bishop and centred on the Saint-Lambert de Vaugirard Church and Square, this quartier hosts many exhibitions, shows and fairs at the Porte de Versailles exhibition centre. Home to the spacious Georges Brassens Park, this is the most affordable area in the 15th arrondissement for renting or staying within easy reach of central Paris. 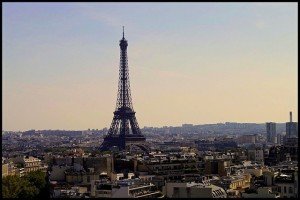 Necker is the most expensive and upscale quartier of the 15th arrondissement, particularly the luxury apartments which enjoy commanding views of the Eiffel Tower. Recently renovated around the Montparnasse station, this quarter clearly demonstrates its past. Prior to the French Revolution, this arrondissement was occupied by many religious houses and hospitals, leaving a legacy of fine buildings and peaceful streets in this area. It still has several hospitals including the Necker Enfants Malades Children’s Hospital and is home to the Institut Pasteur, a museum and foundation dedicated to medical research.

Once the village of Grenelle, this former warren of poor streets was overtaken by industry in the 19th century and is still a busy commercial district. The Front de Seine district is home to some of the highest buildings in Paris, such as the Tour Montparnasse skyscraper. Completed in 1973, this lofty landmark is the second highest building in France at 210m and it stands out like a lonely monolith above the surrounding domes, spires and flat-roofed office blocks. The terrace and 56th floor are open to the public offering panoramic views across Paris, including the Seine and the Eiffel Tower, from the contemporary Ciel de Paris bar/restaurant. The busy Beaugrenelle shopping mall is also in the Grenelle Quartier.

Quartier Javel is best known for the Georges Pompidou Hospital and several French television studios. It has come a long way from its industrial past, where bleach was invented and manufactured. It’s a great place for tourists to visit as it includes the Aquaboulevard water park and the André-Citroën Park.

Things to do in the 15th Arrondissement

Housed in the apartment where scientist Louis Pasteur lived in his later years, the museum is filled with fascinating personal memorabilia, scientific instruments and records. The flamboyantly decorated mausoleum is worth a visit, in the garden of the house. Discover our selection of Museums!

This indoor arena hosts sports fixtures, boxing matches, ice shows, circuses, musicals, shows and concerts with seats for up to 4,500 spectators. It is one of the best venues in Paris and is well worth checking what’s on during your visit to Paris.

The 54-acre showground is not surprisingly the largest in France. It is divided into eight separate venues and hosts all sizes of events, shows, conventions and exhibitions.

The 7,000 sq.m Aquaboulevard on rue Louis Armand is the largest water park in Europe. Set beneath a dome, it is fun in all seasons and has wave pools, jets, flumes, slides, Jacuzzis, lazy rivers, water games and a giant sandy beach.

A fascinating museum displaying the Art Deco sculptures and monuments of Antoine Bourdelle in a sculpture workshop setting, complete with his original tools and furnishings.
This video will give you a quick visit of the arrondissement:

Dining Out in the 15th Arrondissement

The 15ème arrondissement is riddled with small bars and cafés offering inexpensive lunches, three-course meals and rich crème brûlée best enjoyed with a demitasse of coffee. Try the Café Zinc-Zen on rue de la Convention or the chic Le Quinzième where chef Cyril Lignac serves delicious gastronomic French cuisine which the city is famous for.

Rue Brancion is a great place to browse for intimate restaurants with dim lighting and live music while stunning views can be enjoyed from outdoor cafés along the rue del la Cavalerie.

Shopping and Markets in the 15th Arrondissement

The Beaugrenelle Shopping Centre is a top place to find luxury goods and affordable fashions.  It was redesigned in 2013 in the style of a traditional Parisian department store with an oval atrium and colourful skylights within the metallic glass façade. The mall includes a range of French brands, a multi-screen cinema and a choice of restaurants overlooking the River Seine. If you get to the roof terrace, you will find it planted with regional flowers and bee hives!

Street markets abound in this delightful area with several outdoor markets for every day of the week. The main markets are Saint-Charles, Lefèbvre, Cervantès, Grenelle, Lecourbe Vasco de Gama and Convention Markets. They sell fresh foods, cheese, paté, meat, flowers, fruit, vegetables and bakery items and operate from around 7 a.m. until 3 p.m.

Anouk a true born & raided Parisian, Jazz and Art lover. Spend most of my time in coffees and local venues. You might find me at La Belleviloise, aka my Headquarters, in the 20th district.

Top Events in Paris this March 2016

Why You Should Visit Paris During The Holidays

Wander Through The Fabulous Markets Of Paris