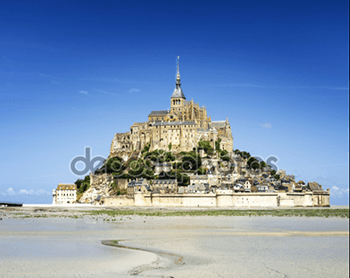 Stretching across northwest France from Cherbourg to Dieppe, Normandy is an agricultural region blessed with outstanding cuisine and unspoilt natural scenery. The 360-mile coastline has a range of topography, from the craggy granite cliffs and timeless fishing villages on the Cotentin peninsula to the long sandy beaches bordering La Manche (English Channel). Further inland you’ll find timeless villages, farms and apple orchards which still produce cider and the rich amber nectar of Calvados.
Attune your ear and you may still hear the faint rumble of World War 2 history amid the poppy-strewn landscape. Normandy and the D-Day beaches are still a place of pilgrimage for many visitors and military historians who come to pay their respects at the historic D-Day landing sites and cemeteries in this region.
Rising from the Gulf-stream-warmed waters of the English Channel, the silhouette of Mont Saint-Michel heralds an interesting landmark with its UNESCO listed Abbey Church. Historic towns such as Evreux and Rouen provide pleasant days browsing old cathedrals, rustic markets and medieval buildings. More Norman history is revealed in the impressive 11th century tapestries at Bayeux. Further east, the upmarket resort of Deauville, nicknamed “Paris by the sea”, has an excellent boardwalk and beautiful wooden buildings housing designer boutiques.

Normandy is sub-divided into Haute-Normandie (Upper Normandy) and Basse-Normandie (Lower Normandy). It has a similar climate to the south of England with plenty of dry, sunny days between May and October, making it the perfect time to explore this quiet region, from sandy coast to pastoral inland scenery.

This region, including Brittany and the Channel Islands, alternated between English and French rule prior to the final defeat of England during the Hundred Years’ War. In 1944, the Normandy Landings saw 45,000 allied troops landing near Bayeaux, commencing the Battle of Normandy that ended with the liberation of Europe from the Nazis, despite terrible human cost.

Things to Do in Normandy

From wooden gabled farmhouses to fine cathedrals, the area is a mixture of delightful architecture for sightseeing. The inland agricultural area of west Normandy is made up of a patchwork of irregular fields divided by high hedges and known as bocages. The wooded hillsides and meandering river valleys make this a wonderful area to enjoy peaceful walks or bicycle rides between the villages. Orne is true horse country and there are plenty of stables offering treks through the countryside.
The meandering River Seine makes its final journey towards Le Havre through the dramatic white cliffs around Les Andelys, an area of outstanding natural beauty for scenic hikes, fishing and boat trips. Along the Normandy coast there is excellent sailing and a host of maritime and fishing festivals to join in during the summer months.
Gourmands are in for a treat with the bountiful fresh fish and fruits-de-mer which are the staple of Normandy cuisine, along with fresh local produce sold on local open-air markets. The dairy industry produces rich Camembert cheese, Neufchatel, tasty butter and thick cream.

Caen
The main focus of World War 2 history can be found around Caen, a university town with a huge mediaeval castle. The nearby D-Day beaches of Utah and Omaha Beach bring 20th century war history vividly to life and remain a popular place of pilgrimage for war veterans. Excellent museums and sobering memorials focus on the Normandy invasion, bombardment and liberation of the area.
Rouen
Known as the Gateway to Normandy, Rouen celebrates the life of its most famous martyr, Jeanne d’Arc. The towering Gothic cathedral with its equally oversized Renaissance clock make this a must-see city to visit.
Dieppe
A pretty town with Norman architecture and a white cliff backdrop to the sandy beach and harbour.
Le Havre
This major port city bordering the English Channel is best-known for its bargain shopping.
Giverny
Gardeners and artists alike will enjoy a day out in the charming village of Giverny, home of Claude Monet. See his lily pond, immortalised in his paintings, and enjoy his abundant flower garden before exploring the rest of this art-orientated village.
Mont Saint-Michel
A day spent at Mont Saint-Michel is a wonderful experience once you have walked across the causeway at low tide and climbed the steep street for breathtaking views from the terraces. The Gothic Abbey, a UNESCO World Heritage Site, dates back to the 11th century and is a Normandy highlight.
Hornfleur
Hornfleur is undoubtedly Normandy’s prettiest harbour with timbered houses overlooking a flotilla of bobbing boats and the wooden church of Sainte-Catherine nearby.

Normandy: War-Torn Yet Full of Life

Touch 20th century history at local museums, discover quaint villages, and feel your heart thrill at the sight of fields of scarlet poppies. Spend time on the wide sandy beaches, sunbathing, walking or dipping your toes in the English Channel waters. Tour World War 2 museums and attend local festivals such as Dieppe’s Herring Festival in autumn. At the end of each day, sit back and savour the heart-warming experiences over a glass of Calvados and fine French cuisine as nighttime descends.